skip to main | skip to sidebar

At the 2013 Venice Biennale the world was  treated to the bizarre spectacle of Kenya (the country that gave the world Wangechi Mutu and Magdalene Odundo) being "prostituted" to China and Italy with a pavilion where artists from these countries greatly outnumbered Kenyan ones. As if this wasn't sufficient humiliation, despite the inevitable outpourings  of derision, critical outrage  and depositions to government ministries,  the same individuals  are set  to do a repeat performance this year.

I think the piece of art work from the 2013 Biennale that summed up the  disgraceful 2013 enterprise most successfully  was the main instigator, Armando Tanzini's carved African woman. This piece (most likely not carved by him as he is in the habit of paying African artists to produce work for him under questionable ethical circumstances) seems to  hint at his relationship with Africa. The unfortunate woman lies prostrate on the floor with her well rounded "African bottom" raised invitingly for someone to take advantage of.

The antics displayed through this pavilion inadvertently spotlighted the African realities of ruthless and irresistible foreign influence in pursuit of resources, exploitation, political, financial,moral and sexual corruption, collusion, impunity  and a failure to value ones own people/assets.

In Venice this May it seems the world will be presented with the same unconscious exposé and meditation on negative aspects of Kenya and  it's continent. On the other hand - if action is taken it may it not be fanciful to imagine that viewers will be looking at an empty pavilion  with large signs stating " CLOSED BY PUBLIC DEMAND"?.
Posted by Unknown at 5:16 PM No comments:

Check out  latest auction with The Auction Room here . Works from all over the African continent and some from the Diaspora - from London to Trinidad. Prices range from £300 to just under £30,000.

This sale presents a great opportunity to bid for highly sought after works by Maimouna Guerresi, Fabrice Monteiro, Goncarlo Mabunda, Pascale Mathine Tayou, Ablade Glover  and many others at  favourable prices.

Mario Macilau: The Road Not Taken

The brilliant Mozambican photographer, Mario Macilau arrives in London next week for his first U.K. solo show, The Road Not Taken. This follows  his participation in The Saatchi Gallery’s first Pangaea: New Art from Africa and Latin America exhibition  last year. His new show contains a collection of powerful images from two major series The Price of Cement and Out of Town.
Most of Macilau’s work is concerned with representing the plight of marginalised people but what makes his images so powerful and so haunting is the absence of voyeurism and intrusion that is the back story of many photographs that are in the public domain. Here there is a palpable sense of trust between photographer and subject. Macilau’s explicit aim is to allow his models to tell their stories. The results may be harrowing but they invariably invoke a sense of shared humanity.


His Out of Town works focus on neglected communities – the image below is of a Maasai man taken in Kenya in 2014.

Posted by Unknown at 6:29 PM No comments:

Ismaila Manga is one of Senegal’s most interesting artists. He graduated from Senegal’s Ecole Nationale des Beaux Arts in 1982 and later spent thirteen years in Montreal where he attended Ecole international du design de Montréal before returning to Africa determined to rediscover his own continent. His work features in collections both public and private, in Senegal, Europe, the United States, Canada and South America. 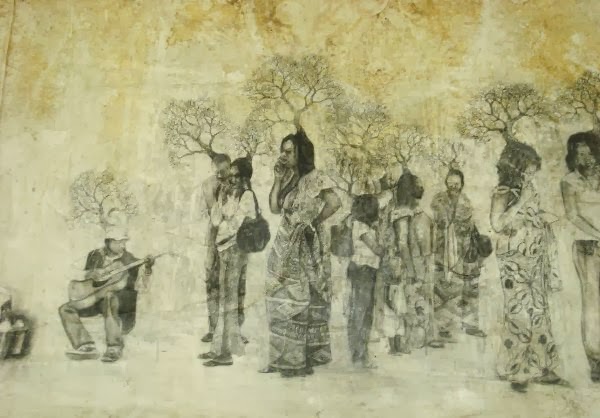 “Every image fights with death, containing the memory of what has gone, starting with the ancestors,” explains Ismaila. “On the other hand any denial of death weakens the vitality of our mental life. Myths, signs and symbols allow me to establish what seems to me to be the essence of our humanity: the temporal.”
“I use the passing of days and nights to mark on canvas the imprint of time, letting the latter do its own work, materializing in rust obtained by the oxidation of metals. The photos I use in my work are just memories which I project on to the canvas, marked by time and drawn with a lead pencil, the simplest of materials that an artist can use.”
Click here to view our collection of Ismaila Manga pieces.
For enquiries about Ismaila Manga’s work please contact:
Ed Cross ed@edcrossfineart.com +44 (0) 7507067567

Nathalie Bikoro and the language of history

Nathalie Anguezomo Menier Mba Bikoro is a French-Gabonese interdisciplinary artist working with visual arts & live art performance.
With an education in Politics, Philosophy and Media Arts, Bikoro left France and the UK to return to Gabon to set out her work as an artist. 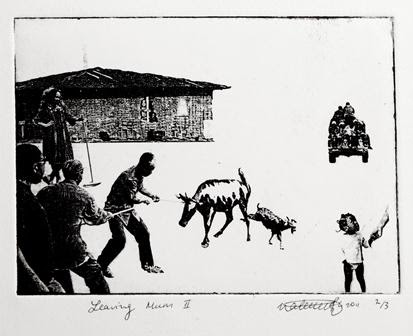 
Her 10 year battle with leukaemia during childhood in Gabon, the Netherlands and France has influenced the narrative and methods in which she chooses to create her work. This personal struggle for recovery and return back to her family has pushed her visual language as well as setting goals to develop independent creative initiatives in the arts and culture lead by local people. Her aims and objectives are to incorporate converging arts and sciences into her own practice and research towards developing a Cancer Recovery Arts Centre. She aims to do this by incorporating creative spaces for interaction for children and adults in Libreville, Lambarene & Bitam (Gabon) and by developing educational collaborative community projects lead by local people. 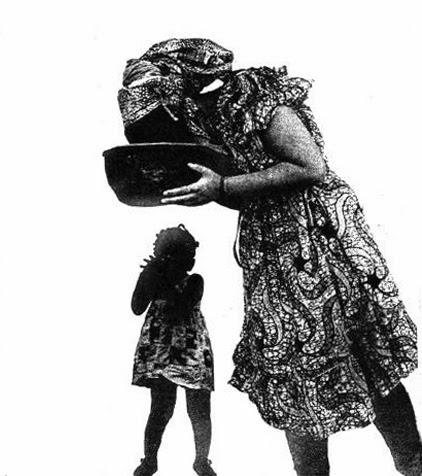 Into The Looking Glass, 2011, Photo-etching; black ink on ivory paper, 9.3 x 10.5cm
Mba Bikoro uses the vocabulary of various art forms to make works that function to create fractured narratives and blurs boundaries between meaning, experience and aesthetics. Her alternative live art performances are unique interpretations of historical mythology and challenging appropriations of a knowledge far from ordinary. In doing so she highlights, accentuates and magnifies elements of the relationships present within these spaces.
Her practice proposes a composition of sound, body movement, archaeology and digital performance and encourages interactive response. Her approach responds to people and spaces mediating a great awareness of combining politics and philosophy.
Click here to view our collection of Nathalie Bikoro pieces.
For enquiries about Nathalie Bikoro’s work please contact:
Ed Cross ed@edcrossfineart.com +44 (0) 7507067567

Kimathi Donkor is a British artist living and working in London whose large, figurative oil paintings have been exhibited in museums and galleries across the UK and internationally. 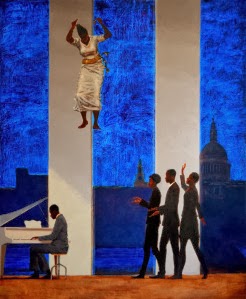 Hailing from a family with roots in Ghana, Jamaica, England, Zambia and Poland, Donkor’s meticulously crafted compositions draw on the traditions of portraiture and historical painting. Yet the themes of his work address dramatic modern subjects – ranging from urban conflict in contemporary London to the adventures of Ghana’s anti-colonial heroine, Yaa Asantewaa. Sitters are often friends or family, which, he believes, imparts a degree of intimacy to the monumentality of his figures.
Donkor is a master painter in a digital age, but his work is anything but anachronistic. It is steeped in historical, contemporary and art history references that inform, entertain and challenge the viewer. His paintings are both beautiful works of art and complex political/historical conundrums, arising out of his own heritage and at times challenging personal journey and his astute study of history and art history. 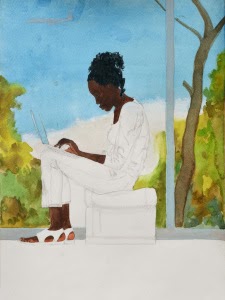 In 2012, Donkor was commissioned by Iniva (Institute of International Visual Arts) to produce new paintings for his acclaimed Queens of The Undead solo show at Rivington Place, London. In 2011, he was the recipient of the Derek Hill painting award for the British School at Rome, which included a three-month residency in Italy, studying the work of the Baroque master, Caravaggio.
In 2010, the artist's paintings were exhibited at the 29th São Paulo Biennial in Brazil. His Caribbean Passion paintings are currently on long-term display at the Usher Gallery museum in Lincoln. From 2009 to 2011, Donkor collaborated with the artists Raksha Patel and Eleni Zagkali alongside a group of young Londoners to create artworks for the Seeing Through participatory project at Tate Britain.
Writing about the artist’s work has appeared in Frieze.com, Studio International, The Guardian and Visual Culture in Britain amongst many other journals.
Kimathi Donkor has been has been the recipient of two full-time painting bursaries from the Arts & Humanities Research Council. He gained his Master’s degree in Fine Art at Camberwell College of Arts (2010) and his Bachelor’s degree in Fine Art at Goldsmiths College (1987). He is currently completing a doctorate in painting at Chelsea College of Art and Design.
Click here to view our collection of Kimathi Donkor pieces.
For enquiries about Kimathi Donkor’s work please contact:
Ed Cross ed@edcrossfineart.com +44 (0) 7507067567 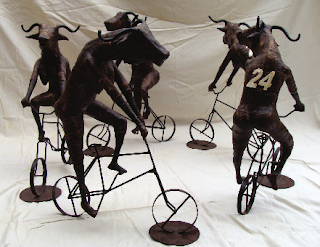 Ed Cross was recently interviewed by Richard Mudariki for Omeka Magazine. He and Richard discussed Ed’s introduction to African art and his time spent in Africa as a sculptor. Ed shares his thoughts on the current state of the market and how selling African art online is growing in popularity and profitability.
Read the full article:
http://issuu.com/richardmudariki/docs/85/1?e=8722852%2F5808048
Posted by Kate L-T at 6:13 AM No comments: